After months of planning and anticipation the 13th of January was finally upon us. We arrived at 9:30am in Terminal 2 of Dublin airport for the first of our three-part journey with a short flight to London Heathrow ahead. We reached London at 1pm and had a 5-hour wait time to look forward to until our flight to Johannesburg took off. After an 11-hour trip we touched down in South Africa at 7am on Sunday morning to see off Gavin Hoey to his host family, the De Sousa’s in Johannesburg. We were then left with a short flight to Durban before we started our own journey.

Exactly 24 hours after we arrived in Dublin airport, we met our new school vice-Principal Mr Munro and his wife who would be looking after us for the next ten weeks. Once we reached the boarding establishment at Glenwood High School we dropped our bags and got changed into training gear for a three-day day High Performance Camp before school started back on Wednesday after the summer holidays. We went straight into a very intense training session testing the four of us mentally and physically in the 30°C heat. Training finished up at 4:30pm for the day and we headed back to the famous Gibson House where we got to meet our fellow boarders and house mates. After a well-deserved rest, we were up early at 6am for day 2 of the HPC. We took part in different batting and bowling drills with video analysis being used to help us to improve our games. In the afternoon, Mr Munro (Vice-Principal) showed the four of us around the school including the spectacular sports facilities with four separate cricket net practice areas situated around the school. On the last day of the HPC we looked at some of the greats of the game such as Virat Kohli and AB de Villiers and how they had developed their batting, bowling and fielding skills.

On the first day of school, Louis McDonough, Daniel Swift and I went straight into our first 2nd team training session with James Maginnis playing with the U16A’s. The first fixture of the term was against local rivals Durban High School (DHS). We made 253 all out with Louis batting very well before being unfortunately run out. We went on to bowl DHS out for 113 to secure our first win. The U16A and the 3rd team also recorded victories against DHS meaning a clean sweep across all teams for Glenwood. James, Louis and I had a 5:30am wake up ahead of our two-hour journey to Eshowe Cricket Club. Daniel was not able to travel after suffering an elbow injury the day before. For some of the boys this was their first experience of playing against a men’s side, but this was a very normal feeling for us Leinster boys and this stood to us with James making a very strong 31 and Louis making another promising knock of 22. The scoreboard pressure was telling with Eshowe being bowled out for 137 in chase of 244. 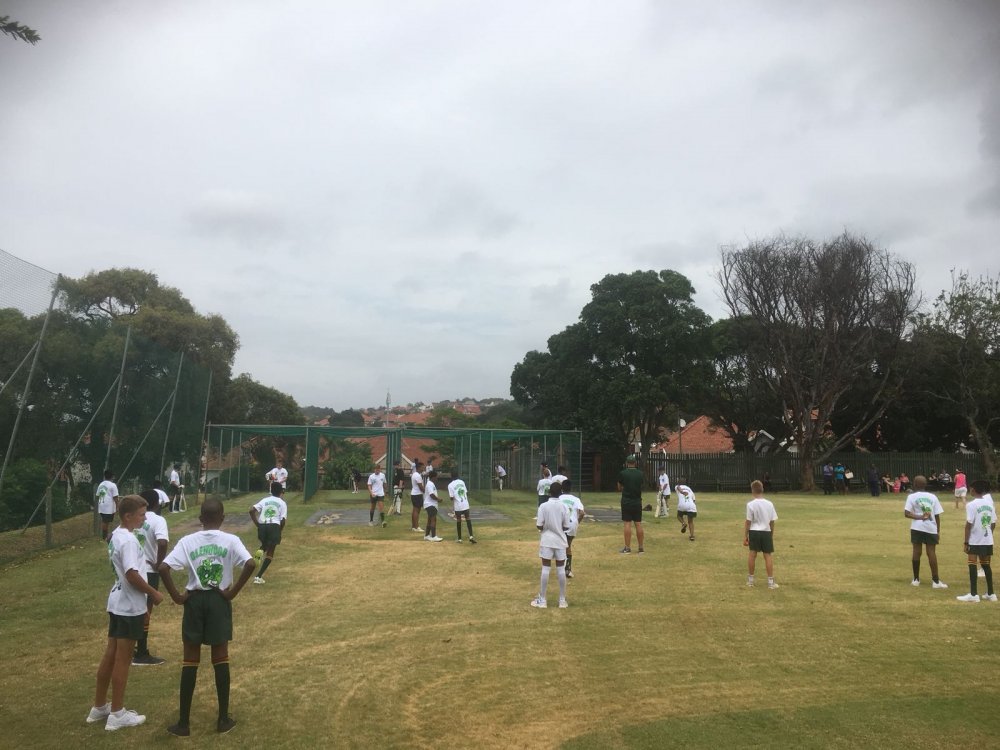 Monday saw the start of the academy that will run every Monday, Tuesday and Thursday of the week. We had a very good standard net session on Monday. With Tuesday focusing on batting drills which was very beneficial to us helping to build our knowledge of the pitches in South Africa. With Wednesday being our rest day, we visited Kingsmead stadium, the home of the Dolphins where we watched their game against the Lions with the home crowd in full voice as the Dolphins recorded a 7-wicket win. Thursday was a dynamic fielding session ahead of big fixtures against Westville scheduled for the weekend. Daniel’s 3rd team recorded a great win against a strong Westville side but unfortunately the U16A and the 2nd’s suffered tough defeats to the same opposition. But, with a T20 game on Tuesday against Clifton and a trip to Hilton on Saturday we have opportunities to redeem ourselves and record two victories for the school against their big local Durban rivals.

I would like to thank Cricket Leinster and Glenwood High School for the opportunity to play at such a high level and I am looking forward to the next two months here.