With one round of matches left still top play there are 12 players who have scored 400 runs or more in the RCD1 League and Leinster Senior Cup. Three of these , Simi Singh [YMCA], Jamie Grassi [North County] and Cormac McLoughlin Gavin [The Hills] have already qualified for the Marchant Cup [minimum 500 runs].

Of course in the modern game it is not just the average runs scored per wicket that matter - but the speed of scoring. Three players [with more than 400 runs] have a scoring rate of better than a run a ball, Max Sorensen [The Hills], Eddie Richardson [North County] and Simi Singh.

Nine players have taken 20 or more wickets in RCD1/LSC. Joe Carroll [Leinster] is leading the averages but still needs one wicket to pass the 25 wicket threshold to qualify for the O’Grady Cup. Five other players have already qualified. The top wicket taker is Andrew Sheridan [North County] and the two bowlers with economy rate below 4 are Carroll and Shariful Islam [Clontarf]. No player among those with 20 or more wickets have taken five wickets in a match.

In the all-rounder stakes Eddie Richardson has a sizeable lead but he is capable of being caught in the last round. 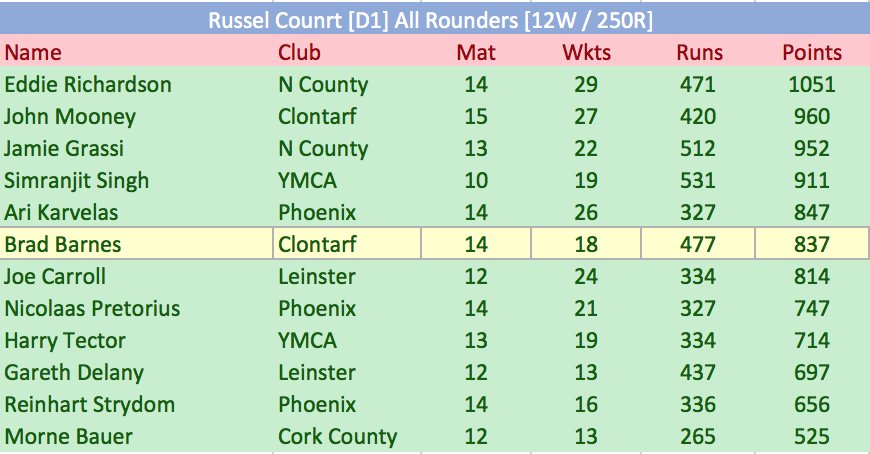 Finally, in the field, Jamie Grassi and Nicolaas Pretorius [Phoenix] are very close at the top of the wicket-keeping table with 22 and 21 dismissals respectively. In terms of catches only two players have made it to double figures so far - Albert van der Merwe [The Hills] and Paul Lawson [Pembroke] are both on 10.