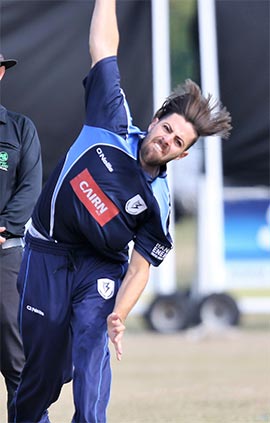 Tyrone Kane was one of the eleven fortunate players, selected to represent Ireland in the first men’s Test Match against Pakistan in May 2018, having made a late bid for his selection after some fine form over the winter months of 2017-18 leading into the start of the 2018 season.

The Merrion man has long been known as a power-hitter, more than capable of clearing the ropes, but it was his consistent medium-fast bowling that brought a Test place.
In all formats, Kane can be devastating with ball in hand. Twice in T20 InterProvincials he has taken 5-wicket hauls and took a hat-trick against the Northern Knights at Stormont in May 2015.